Keep Your Kids Safe Online, No Matter Their Age 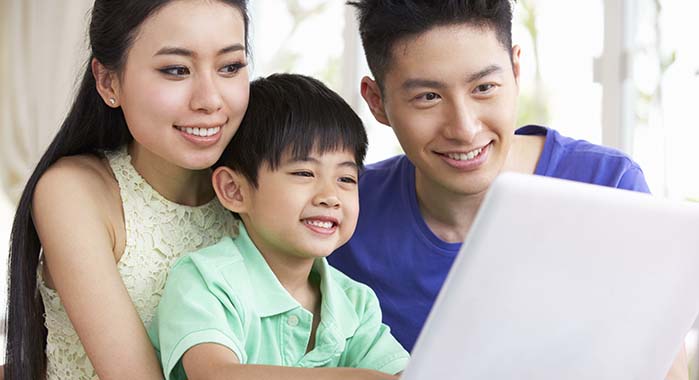 We were having a wonderful time, eating great food and enjoying actual adult conversation with five other couples at our friend J’s house. That was back when the kids were young and we could just toss them together like kittens and let them play. There were eight of them, ages 5 through 10, upstairs watching TV. Or so we thought.

We were opening a third bottle of wine when my friend’s 7-year-old son appeared at the end of the table with a troubled look on his face. There were pictures of naked women all over the computer, he said.

So much for adult conversation. We quickly abandoned our steaks and headed upstairs. It turns out that one of the boys had been told by a schoolmate to search for the words “sexy women.” You can guess what they found. This was not exactly the gentle introduction to the birds and the bees most of us had imagined.

Our hostess had broken two of the cardinal rules of family computing: 1) Put the computer in a place where you can see what the kids are up to, and 2) Use some kind of filter to keep them from getting sucked into the Net’s slimy underbelly.

This was in the mid-2000s. Back then, it was a lot easier to safeguard the Internet, because most families shared a single home computer with their kids. Now there are so many ways for your progeny to reach the Internet — smartphones, tablets, laptops — it’s a flippin’ nightmare.

But it’s not impossible, provided you have a strategy for managing Web access. You’ll have to get your geek on and become familiar with the tools available for filtering websites. Most importantly, you’ve got to start early. The sooner you teach your kids the good habits of digital citizenship, the more likely those lessons will stick.

Net management through the ages

How early kids should start surfing the Net is something only a parent can decide, says Caroline Jones Knorr, parenting editor for Common Sense Media, which rates thousands of websites, apps, games and movies for age-appropriate content using child development guidelines. Common Sense’s rating system begins at age 2, which seems to me a sensible age to start surfing. Your mileage may vary.

The best time to introduce kids to the Internet is when they’re still small enough to fit on your lap, Knorr says. Co-surfing lets you teach them the basics of how to navigate the Web, as well as things like the difference between Web content and ads and the kinds of information they should never share.

At this age, you really want to limit their access to a small collection of sites you know are kid-friendly and safe, like those offered by Common Sense Media. Seeking out quality, age-appropriate sites for your kids is one of the most important things you can do, Knorr adds.

At the very least you’ll need to expand the list of sites they’re allowed to spend time on and use the safe search settings inside your favorite search engines to limit what they’re exposed to. If they love to watch videos (and what kid doesn’t?), create a YouTube account for them and subscribe them to channels of your choosing, Knorr suggests. Take care to limit the time they spend online, and make sure you’re in the room when they’re browsing.

Up till now, regulating your kids’ Internet access has been easy. Those days are over. By the time they hit their tweens, your kids are probably more tech-savvy than you are. They will easily circumvent any simple controls you’ve applied and may be able to figure out workarounds for the filters you’ve deployed — like creating new user accounts that aren’t being monitored, or sneaking onto devices that aren’t blocked, like (ahem) their parents’.

At this age, personal privacy and the risks of oversharing become important, Knorr notes. Even though they’re not supposed to open accounts on Facebook and other social networks until they’re 13, many kids start before then. You should join any social networks they belong to and talk with them about how you’re allowed to interact in front of their online friends. You’ll want to carefully go over their privacy settings on Facebook and other social media sites and talk about the kinds of things they should never share online, especially physical locations and photos.

By now your little darlings have become full-blown hormone-crazed teenagers with smartphones and accounts on social networks you’ve never heard of. Scary? You bet.

The biggest dangers for young teens are not what they can find on the Internet as much as what can find them — creeps, stalkers and bullies, some of whom may be their own classmates. Oversharing, acting out and seeking external validation from strangers are three common teen behaviors you have to watch out for at this age, Knorr says.

At the same time, they’re growing into adults and chafing at parental restrictions. So you’ll want to ease off the blocking and amp up the monitoring. You’ll also need to secure their phones; most carriers offer some kind of parental controls for an additional fee, or you can download an app from iTunes or Google Play. If your child’s phone has a password, you’ll need to know it so you can check it regularly. But you may have to threaten the nuclear option — total communications disconnect — to force them to reveal it.

If you’ve done your job right, your kids should be pretty savvy netizens by now. You may be able to stop blocking content entirely, but you probably still want to monitor them periodically.

Here the biggest worry is the damage your proto-adults can do to their own nascent reputations. Unlike Las Vegas, what happens on Facebook doesn’t stay on Facebook — and the same goes for any other social network. Rest assured that any embarrassing photos or off-color comments will be found by college admissions officers, future employers and even potential spouses. Your job is to convince your kids that this stuff matters, to help them locate their past mistakes, and to bury them as deeply as possible.