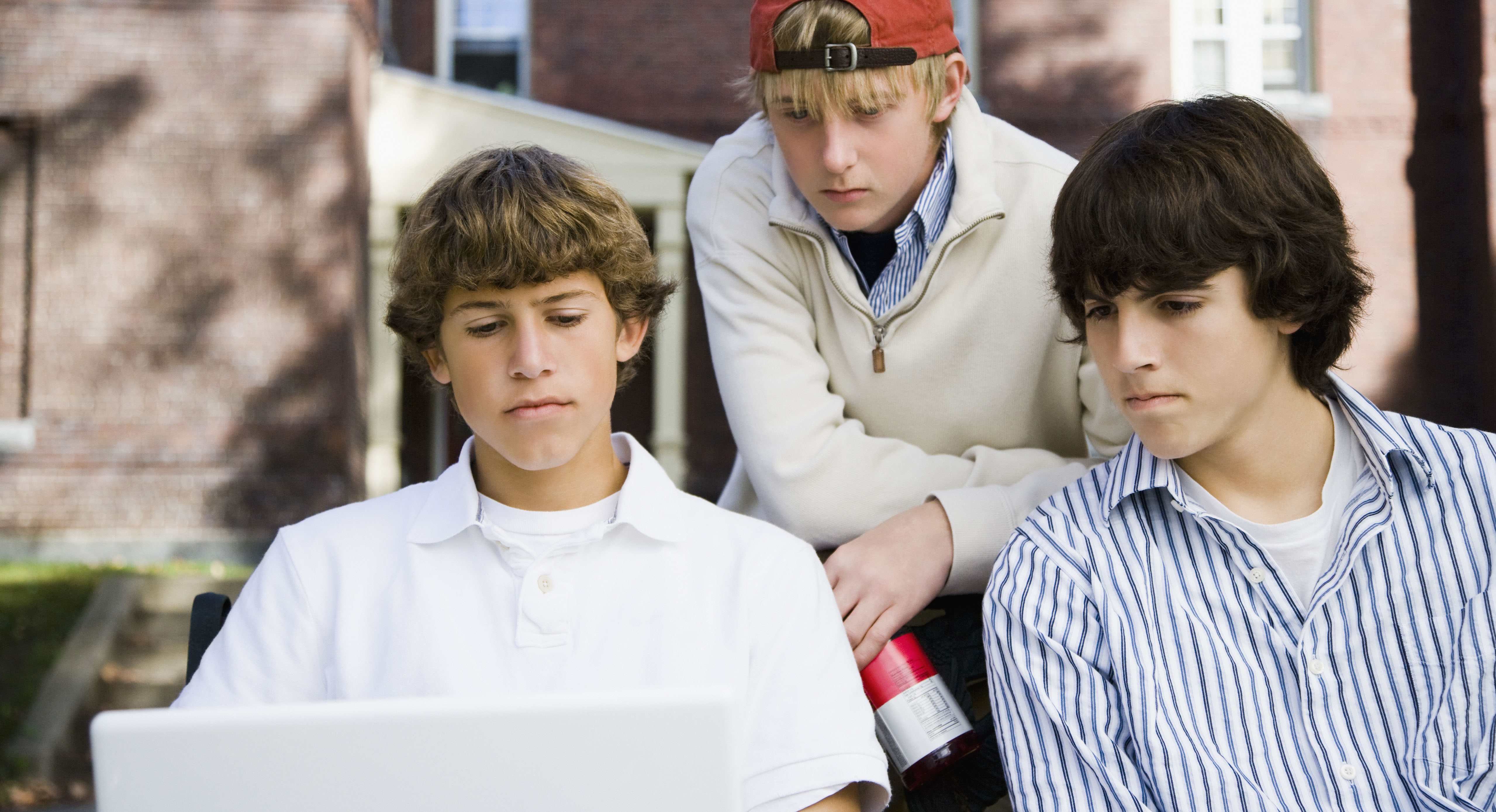 The first time I was bullied, I was in fifth grade. A kid named Sean, who looked a little like Eddie Munster, decided it would be fun to torment me. So every day at lunchtime he’d walk up and punch me hard in the stomach, knocking the wind out of me.

I stoically accepted this as my fate for being kind of a dork, but eventually the teacher noticed. He pulled us both aside and insisted I punch Sean in the stomach as payback. I did. Sean just laughed. It was distinctly unsatisfying.

A month later, Sean was out of the school. Right now he’s probably in prison, dead, or running an Internet startup.

On the first Monday of October, kids are asked to wear blue shirts to school to raise awareness of bullying prevention, says Ross Ellis, founder of STOMP Out Bullying, which organizes the event. What started six years ago as a small event has gone global, with celebrity endorsements and video game promotions. For example, characters inside Ubisoft’s Just Dance 2015 will don blue T-shirts with the phrase “Stomp Out Bullying” on them when the product ships later this month.

Bullying is even worse than it was when I was a kid, in part because of cyberbullying, where taunting happens online, often anonymously. Yet many parents still don’t understand what bullying is, how to tell if their kids are victims, and what to do about it if they are. Here are a dozen things you need to know about it:

1. Not everything bad that happens to your kids is bullying.

Thanks to the heightened attention paid to bullying in schools and the media, it’s a term that’s often misused, says Dr. Michele Ybarra, president of the Center for Innovative Public Health Research, which explores how technology affects young people’s health and well-being.

Technically, bullying is when one person has more power than the other and abuses him repeatedly, Ybarra says. It can range from physical and verbal abuse to spreading malicious gossip, sharing secrets, or posting embarrassing photos online.

A child telling your daughter she’s ugly isn’t necessarily bullying. But taunting her on Facebook every day is another story.

Some 35 to 40 percent of kids say they’ve been bullied at least once by someone in real life, says Dr. Sameer Hinduja, co-director of the Cyberbullying Research Center and professor of criminology at Florida Atlantic University. In the same survey, about 25 percent of kids report having been bullied online.

Other surveys say teens are two to three times more likely to be bullied in real life. Yet cyberbullying gets far more media attention, Ybarra notes.

“Going to school is a higher risk activity for kids than going online,” she says. “But the attention cyberbullying gets has increased the number of conversations about bullying in general, and that’s a good thing.”

3. In some ways, cyberbullying is worse.

Though you’re unlikely to be punched repeatedly in the stomach in the virtual world, the long-term damage from virtual bullying is often worse because the rest of the world may be watching.

“Things can go viral so quickly, there’s a limitless audience to watch and even join in on the hate and humiliation,” Hinduja says. “People are often more willing to be extremely cruel online and say things they’d never say face to face.”

There are nearly limitless opportunities for kids to be harassed online, from Facebook and Instagram to Xbox Live, Secret, and Snapchat — even Club Penguin and Minecraft have had their share of bullies. It’s the rare parent who knows about more than half the apps or social networks her teen may be using. Banning one app or network may not do much good — the tormentors will simply find their victims on another.

Read: Five Mobile Apps That Should Scare the Pants Off Parents

Your child may also be bullied via SMS, which can be harder to detect and stop. A 2011 survey by the Center for Innovative Public Health Research found that one in eight teens was harassed by other students via text message, and about half of those were systematically bullied.

5. It’s really hard to tell if your child is being bullied.

It’s difficult for parents to separate the symptoms of victimization from normal adolescent conflict and angst. The key things to look for are sudden shifts in behavior, Hinduja says.

If your child used to love going to school (it happens) and suddenly doesn’t, that’s a telltale sign. If she’s normally glued to her phone or laptop and now wants nothing to do with them, that’s another. Or if he used to be outgoing and now refuses to leave his room. And so on. These changes may have nothing to do with bullying, but they’re signs that something is wrong.

6. It’s even harder to tell if your child is a bully.

Every victim has a victimizer. And while you hope your child isn’t one, you can never be completely sure. One thing to look for is if she’s suddenly become more secretive than usual, Ellis says. Other signs are if she hides herself away with her phone or computer, quickly closes her tablet or laptop when you walk by, or is maintaining multiple pseudonymous accounts on different social networks. Again, though, these things could also indicate something entirely different.

7. You should try to talk to your kids about it.

Anyone who’s ever raised a teenager has probably experienced the adolescent version of omertà — their unwillingness to divulge any information about their lives to anyone over the age of 17.

Still, you have to make the attempt, Hinduja says.

“Try to find ways to discuss the positives of technology as a whole, and use that conversation to diplomatically probe about some of the negatives they’ve encountered,” he says. “If you come on too strong as a helicopter parent, they will shut down on you.”

8. But they probably won’t want to.

Teens often don’t want to admit they’re being terrorized by their classmates. It may be because they’re embarrassed, fear retribution, or simply don’t want to be called a narc. But a big reason is that they don’t want parents to take away their phones or block their accounts, Hinduja says.

“The kids won’t risk it,” he says. “Smartphones and social media are like oxygen to them.”

His advice: If they don’t want to tell their parents, they may still be willing to open up to a family friend, friendly aunt, teacher, coach, or other adult. The important thing is to make sure they’re not suffering in silence.

If your kids don’t want to talk to any adult, they can report bullying incidents to their school via Sprigeo, a mobile app and website. Students can file reports anonymously if they wish, and about 25 percent of them do, says CEO Joe Bruzzese. Most of the reports come from witnesses to bullying incidents, not victims.

When Sprigeo finds evidence of bullying online, it contacts the social network or app where it happened immediately, and the offending text or image is usually removed within the hour, Bruzzese says.

Sprigeo is currently working with more than 1,000 schools in 27 states. Even if your school isn’t one of them, Sprigeo will contact the school on your child’s behalf and inform them of the incident, Bruzzese says.

Similar apps that allow kids to report bullying incidents to their schools include STOPit and CyberBully Hotline.

10. Technology is not the problem.

Parents of teens victimized online may be tempted to confiscate the smartphones and put a lifetime ban on social networks, but that won’t do much to stop them from being victims, Hinduja says. The bullies will simply find other ways to torment them.

Read: 7 Survival Tools for the Parents of Teenagers

The second temptation: putting monitoring apps on your child’s devices to detect if they’re being bullied. Ybarra suggests parents proceed with extreme caution.

“If you have reasons to be concerned about your child’s behavior and want to put monitoring software on their phones and computers, that’s your choice,” she says. “But you still need to have a conversation with your kids about what they’re doing online. And just because you can track your kids in ways our parents never could doesn’t always mean you should.”

11. Your kids may not want you to do anything about it.

As a parent you may be tempted to march into the school and demand answers, or confront the parents of the bully yourself. And that might only make matters worse, Bruzzese says.

“There’s a fear among adolescents that if their parents find out they will totally blow up,” he says. “That’s why many would rather report incidents directly to their schools.”

Many older teens would rather handle the problem themselves, Ybarra adds.

“If your children decide they have the resources to address the problem themselves, then you’ve probably done a great job as a parent,” she says. “Sometime supporting the kid from behind may be enough.

I’ve barely scratched the surface. There are probably hundreds of sites devoted to bullying prevention. Connect Safely offers a free guide to cyberbullying that will likely answer any questions you have.

Bottom line: The best time to talk to your kids about bullying is before it happens, if it hasn’t already. Today is a great day to do it.

Note: This story was updated to correct information about the availability of "Just Dance 2015."